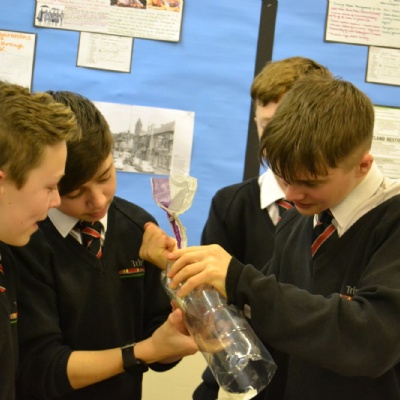 The 10th to the 18th of March was British Science Week. Up and down the country, from primary schools to Universities, everyone was getting involved with activities and events to celebrate science and technology in Britain: Trinity was no exception.

The second ever STEM day at Trinity continued our unique journey in to preparing our young people for jobs and life in the age of technology. Where taking part in STEM activities helps students to develop transferrable skills that will be useful in any future career.

Our Y10s were designing, building and marketing rollercoasters as a way to develop their transferable skills including innovation, time keeping and communication. The aim was to give them something to add to their CV, increase their employability and have fun while they did it.

Our Y9s were looking at sustainable energy, they looked at the efficiency of electric cars, and they built their own wind turbines while sticking to a budget as well as hearing from an engineer who works on sustainable energy generation at Siemens.

The Y8s spent a day studying EcoFactor!; trying to solve some of the biggest problems that our planet faces right now. They were making biodegradable plastic, recycling paper and inventing new ways to get plastic waste out of our oceans. These children are the future and they really got to grips in a hands on way to change the fate of our Earth.

Y7s started the day with a clubbercise session (complete with glow sticks!) where they calculated how much energy they expended in the hour. They then went on to use their STEM skills to build a wind up car, the strongest tower and the best paper aeroplane. Team work, resilience and initiative were needed throughout!

The week continued on Thursday as forty five year 7 and 8 students went to the Big Bang Fair at the NEC in Birmingham, where they watched exciting shows, took part in hands-on experiments, learnt about possible future careers and entered competitions to win some pretty cool new tech. This event is the largest of its kind with thousands of STEM employers demonstrating the variety of jobs to inspire some of our students to change the world.

Overall, it was a fantastic week and Trinity students have shown just how hard they can work and what they are capable of. We can’t wait for the third and final STEM day of the year in June. The theme will be “Big Build”, so watch this space.